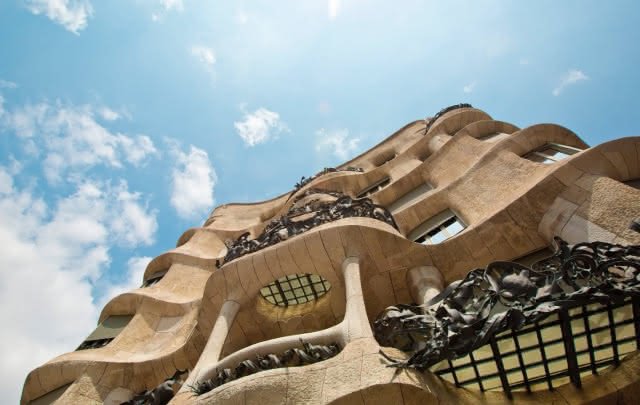 Discover the life and works of Barcelona’s beloved Antoni Gaudí

This 3-hour Gaudí and Modernism walking tour covers all the main sites of Antoni Gaudí and his work. Visit the Eixample district, hear about the Modernism movement and, of course, see the world-famous Sagrada Família. During this tour we dig deep into the roots of the movement and explore the social unrest and political issues that the glossy guidebooks ignore. The result is an unforgettable portrait of one of the world’s greatest cities and a tribute to some of its most talented designers.

Your Gaudí and Modernism Tour starts by the Jaume I metro exit and finishes in front of the Sagrada Família.

Your expert local guide will take you on a tour of the must-see sites related to Gaudí in Barcelona. Millions come from around the world to see the famed Sagrada Família, but in fact, Gaudí’s stamp of genius is all over the city. Visit the stunning residential building Casa Milá (La Pedrera). See the Casa Batlló, adjusted by Gaudí from conventional house to masterpiece. As you stroll through the Eixample district, you’ll see works not only of Gaudí, but also of other stars of the Modernism movement.

The spirit of a generation

Much of Gaudí’s genius can be attributed to social upheaval and the political issues of the time. On this walking tour, your expert guide will not only show you Gaudí’s Barcelona masterpieces, but will also tell you about major events that impacted him, like the Tragic Week, when the Spanish Army clashed with Barcelona’s working class. You will need this background to fully appreciate his genius and the Zeitgeist of when he developed his creations.

The intriguing life and tragic death of Antoní Gaudí

Don’t just see the sites – hear about the life and genius of the man himself, including his poor health as a child, his devout Catholic faith and strict vegetarianism, unorthodox working style (he rarely drew complete plans), and of course, his tragic death.