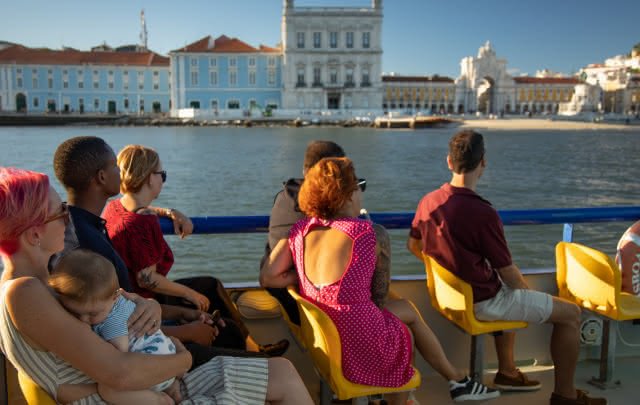 From a former fishing village to the home of Portuguese nobility, Belém has seen the rise and fall of the world’s first global empire. This beautiful and ancient settlement sits on the banks of the River Tagus, and tells the story of the beginning of globalization, and of history’s greatest explorers. Join us on a stunning 40-minute boat ride to Belém and a 2-hour stroll along the riverbanks, taking in iconic views like the Discoveries Monument and UNESCO World Heritage sites like the Belém Tower and the Jeronimos Monastery.

Your Belém Tour starts by the monument at Praça do Comércio. Discover how a country which lost its last colony in 1999 once had territories covering 60 modern sovereign states.

Hop on board a boat!


This tour will take you to Belém by a boat offered by our partners Lisboat. On this 40-minute boat cruise to Belém you’ll enjoy incredible views of the city from the Tangus River.

The Portuguese Age of Discovery was a time in world history where explorers ventured out to the ends of the earth. Once you arrive, you’ll explore the waterfront of Belém by foot and you will walk in the very footsteps of many great explorers before you. See the massive Monument of Discoveries, which features great explorers like Henry the Navigator, Luís de Camões and Vasco da Gama.

The Portuguese Empire was one of the largest and longest reigning empires in world history. On this tour you will learn about the great conqueror, Afonso de Albuquerque, who stands prominently on his namesake’s square by the waterfront.

The two most prominent monuments that people travel to Belém to see are the Belém Tower and the Jerónimos Monastery. Your guide will recap some of the dramatic battles that this tower has seen and you will also learn about the history of Jerónimos Monastery and the lives of the people who are remembered there.