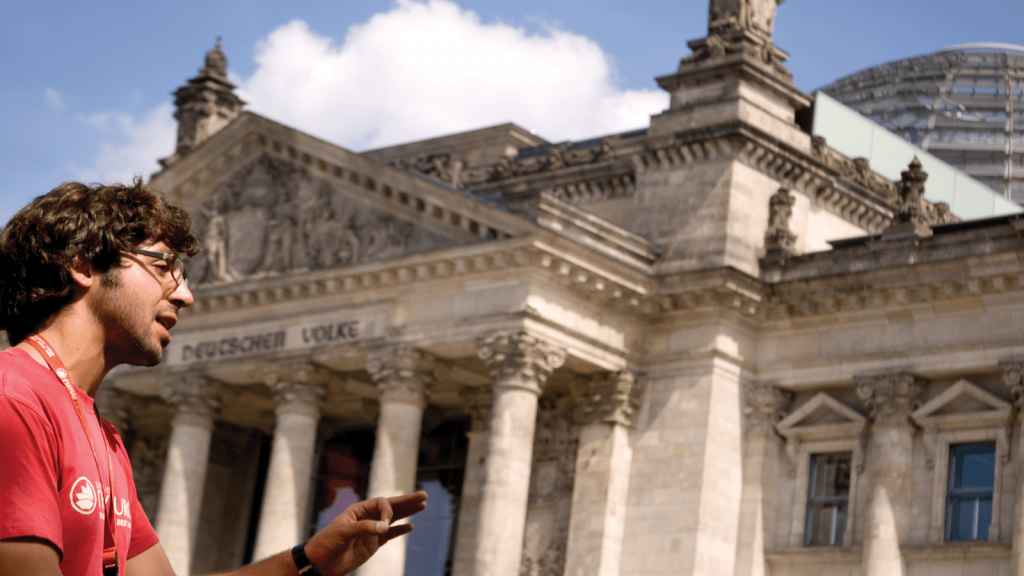 On this 2-hour walking tour, an experienced local guide takes you through the heart of Adolf Hitler’s Berlin, and shows you the scars the Nazis’ reign left on the city.

On this 2-hour walking tour, an experienced local guide takes you through the heart of Adolf Hitler’s Berlin, and shows you the scars the Nazis’ reign left on the city. Discover how the Nazis came to power, learn about their victims through the memorials scattered through central Berlin, and visit what used to be Berlin’s Jewish Quarter.

Your Berlin Third Reich Tour meets in front of the Starbucks at the Brandenburg Gate (S/U-Bahn Brandenburger Tor) and it usually ends at the women’s protest memorial “Rosenstraße” (between Alexanderplatz and Hackescher Markt).

The beginning of 12 years of terror

This 2-hour tour starts at Berlin’s iconic Brandenburg Gate, through which the Nazis held their victory parade when coming to power in 1933. From there, you’ll go to see the Reichstag – once again the modern-day seat of the German Parliament, but (probably) burnt down by the Nazis to gain total power in 1933.

The Nazi government district, and the memorials to their victims

Your expert local guide will then lead you through Berlin’s memorials to tell you more about some of the Nazis’ victims – Jewish, political, homosexual, Sinti Roma and Soviet. After that, you’ll venture towards the Nazi’s former government district, seeing where Hitler’s Chancellory once stood, and remnants of his bunker still remain underground.

To finish the tour, you’ll visit Berlin’s former Jewish Quarter, and learn more about the Nazi’s despicable treatment of the Jewish people. Stroll past the Old Synagogue, visit the former Jewish cemetery desecrated by the Nazis, learn about the remarkable women’s protest, and and hear how the Nazis declared Berlin to be “Jew-free” in 1943.