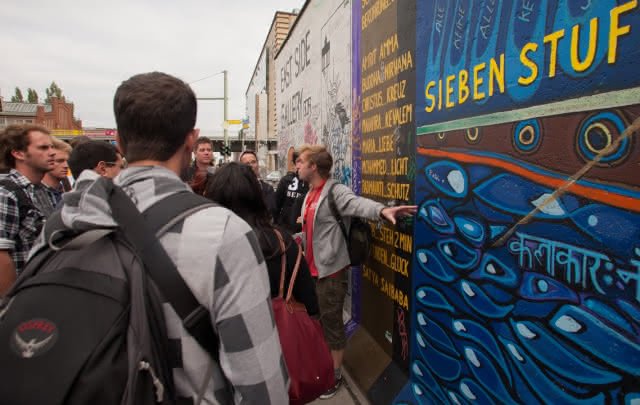 A look at life behind the Berlin Wall, the Red Berlin and the divided city during the Cold War

On this 2-hour walking tour, an experienced local guide gives you a true and accurate account of life in Berlin on the Eastern side of the Berlin Wall under the GDR – the good as well as the bad. Learn about the East German secret police (the Stasi), hear about the spying between the Americans, the British and the Soviets, and discover what life was like for the families who were divided by the Berlin Wall.

Your Communist Berlin and Berlin Wall Tour meets in front of the Starbucks at the Brandenburg Gate (S/U-Bahn Brandenburger Tor).

This 2-hour tour starts at the Brandenburg Gate, which stood alone between East and West Berlin during the time the years of 1961 – 1989, when the city was divided. From there, you’ll head deeper into East Berlin, stopping to see what was the Soviet (and is now the Russian) embassy – only a stone’s throw from where the American Embassy in East Berlin once stood.

You’ll learn not only about the Cold War-era spying between the East and the West (complete with tunnels, double agents, and even gadgets like poison-tipped umbrellas), but also the spying that took place by the East German government on its own people, with the Stasi collecting thousands of records, imprisoning and interrogating their citizens, and even collecting smell jars with their people’s scents.

From there, you’ll visit the Tränenpalast (Palace of Tears) to hear about how families in the West and East were suddenly divided when the Berlin Wall went up in 1961, and their limited reunions in the 28 years that followed. Your expert local guide will then take you to see the most historically accurate piece of the Berlin Wall, explaining to you how the two-wall system (with the Death Strip in the middle) functioned, and telling you about some of the people who tragically died trying to go over the Wall.