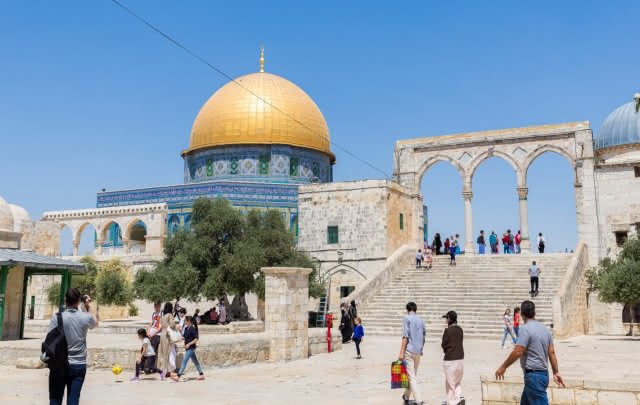 No other city means so much to so many. Find out why on this 4-hour walking tour of Jerusalem’s most important religious sites

What makes Jerusalem the spiritual center of the world for Jews, Muslims, and Christians alike? Join an expert guide on this 4-hour walking tour to understand Jerusalem’s 5000-year-old past and to visit some of the world’s most treasured and controversial places. Go inside must-see sites like the Church of the Holy Sepulcher, the Dome of the Rock and the hidden sections of the Wailing Wall to see Jerusalem’s major landmarks up close.

Your Jerusalem Holy City Tour starts just outside the Jaffa Gate and it usually finishes at Mount Zion, but you can also walk back to Jaffa Gate with the guide.

Judaism, Islam and Christianity all find their spiritual homes in Jerusalem’s Holy City. From the discovery of the true cross to the stations where Jesus fell (the Via Dolorosa), from the grave of Adam to the Hill of Golgotha (or Cavalry), from the Church of the Holy Sepulcher to Dome of the Rock and Temple Mount, from the room of the Last Supper to the hidden sections of the Wailing Wall, from the Al-Aqsa Mosque to the tomb of King David, of all of the tours in the entire SANDEMANs network, the Holy City Tour is surely the one with the most meaningful landmarks.

Go inside some of religion’s most important sites

You can see many of Jerusalem’s major sites from afar – the Dome of the Rock glistens in the sun from Temple Mount, the worshippers at the Western Wall can be seen from some of Jerusalem’s rooftops, and the Church of the Holy Sepulcher suddenly appears as you walk through the Old City. However, on this 4-hour walking tour, your expert licensed guide doesn’t just point these sites out from a distance – they take you up close and inside.

The tour is timed perfectly so that the Temple Mount is reached during its limited opening hours (Sunday to Thursday only), and hidden parts of the Western Wall are discovered for those who want to take a closer look. While the Dome of the Rock is prohibited for those who are not of Muslim faith, the tour gives plenty of time at the Church of the Holy Sepulcher so that guests don’t need to hurry.

While we appreciate that many sites on the Holy City tour bring out strong feelings for many visitors, the tour itself is completely non-political, making it accessible for those who are of religious faith, and those who are not. Therefore, we ask you to join this amazing experience with a completely open mind, and to internalize any personal beliefs for the duration of the tour.