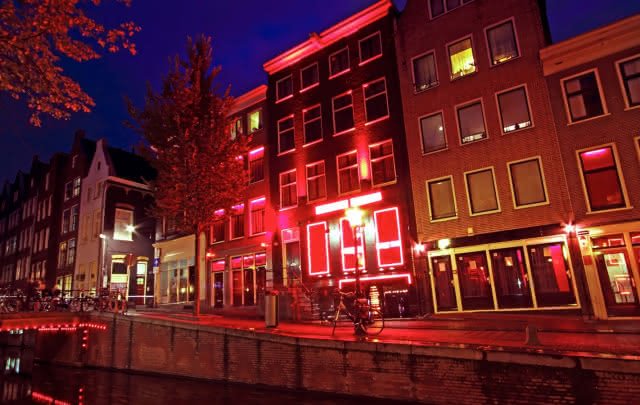 Discover the dark side of Amsterdam’s oldest district with this 1.5-hour walking tour. Join an experienced guide who will bring to life the fascinating and diverse stories of the city’s most controversial neighbourhood, which is also the historic center of Amsterdam! From coffeeshops to sex theaters and fetish stores, find out the realities and fictions of this storied district.

Your Red Lights and Dark Amsterdam Tour meets at the National Monument at Dam Square.

One of Europe’s most famous neighborhoods

The narrow streets and canals at the heart of mediaeval Amsterdam have gone from being known as the city’s most dangerous district during the heroin crisis of the 80s, to becoming a major drawcard for modern-day travelers, attracted by the reputation of Amsterdam’s liberal laws and everything the area has to offer. On this walking tour, you’ll see sights like the Condomerie on the famous Warmoesstraat and hear about how Amsterdam’s coffee shops, sex workers and drug laws became world-famous.

Take guidance from a local

Your expert local guide is not only knowledgeable about the area itself, but is also well up to speed on the challenges that face the locals who live and work here. As more and more people flock to Amsterdam, it becomes harder for local businesses to operate a non-tourist trade and harder for residents to live in this iconic neighbourhood. On this walking tour, you won’t just hear the stories and the history – you’ll also get essential information on how to integrate with the locals and have a minimal impact on their way of life.

*Please note that, out of respect for the locals and workers in the district, the route of this tour does not include streets with sex workers’ windows